Your gateway to the Cloud & to Unified Communications

The Rugged Smart Machine-to-Machine (RSM2M) is a universal interconnection platform enabling Cloud and to Unified Communications connectivity to industrial devices, hence Connecting the M2M World to the Internet of Things Network. The RSM2M Gateway connects industrial protocols like Modbus to Internet, Ethernet and WiFi, bringing machines to the Internet of Things network, while the RSM2M Server connects them to the Voice-Over-IP (VoIP) infrastructure.

Designed to offer universal connectivity between industrial devices as well as IP technology, the RSM2M architecture consists of:

•    This programmable appliance maps industrial devices to telephone extensions. It translates Internet, Ethernet and WiFi data VoIP.
•    Enables multiple Unified Communications and telephony applications, generating voice calls, emails and text messages when an event occurs.
•    Keeps a log registering every event with a date, time and description
•    Direct, immediate alerts on any event happening in your industrial operation. Delivers current status of your facility with a phone call or Cloud notification. 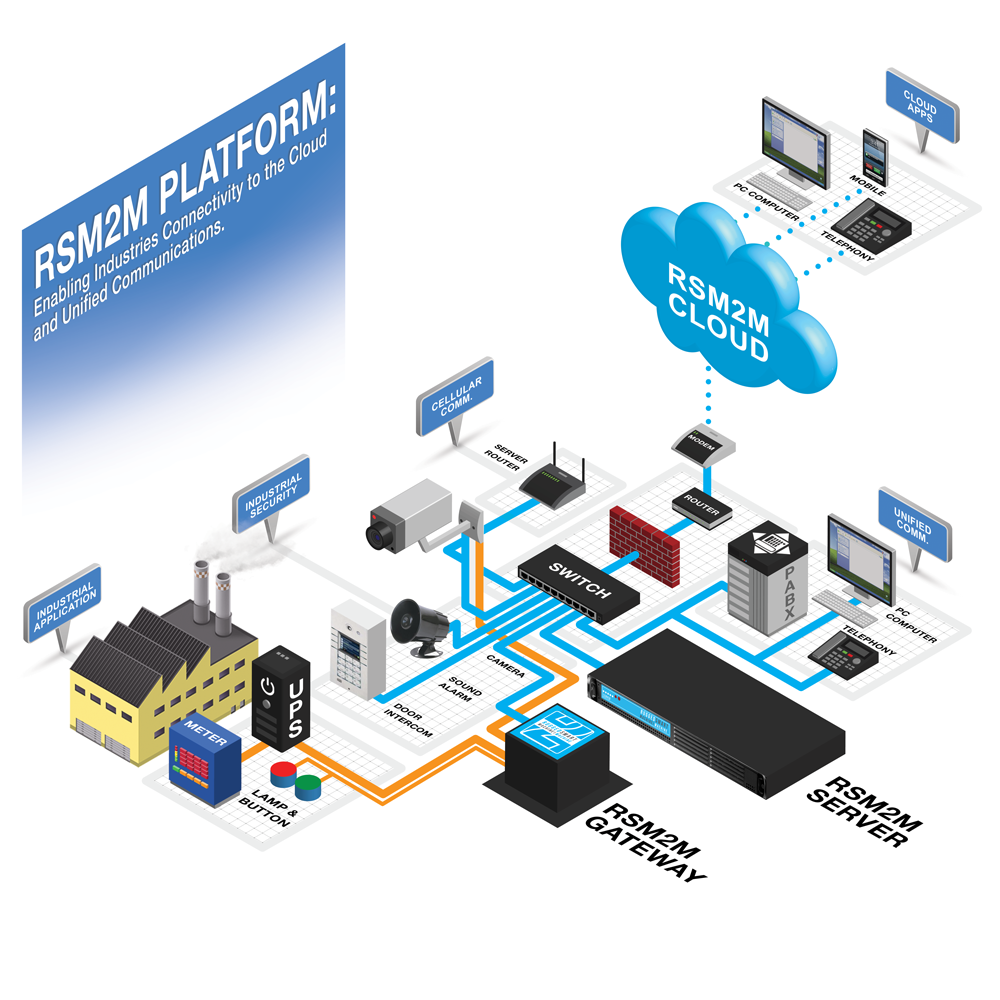 The RSM2M is the ideal platform for industrial security applications. It allows IP video cameras, motion detectors, switch doors, light sensor detectors and sound alarms systems to be interconnected, monitored and controlled through the Cloud.

Let’s say an alarm occurs because a surveillance camera notices an intruder:

-The RSM2M produces a sound alarm or alert
-Pushes alarm to a phone call, email or SMS
-Calls you direct to your cell phone
-Sends notification to a Smartphone app
-Event log is recorded in the RSM2M Server 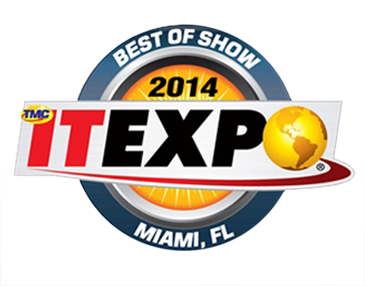 VoIP: Voice over IP (VoIP) is a methodology and group of technologies for the delivery of voice communications and multimedia sessions over Internet Protocol (IP) networks, such as the Internet. Other terms commonly associated with VoIP are IP telephony, Internet telephony, broadband telephony, and broadband phone service.

M2M: Machine to Machine (M2M) refers to technologies that allow both wireless and wired systems to communicate with other devices of the same type. M2M is considered an integral part of the Internet of Things (IoT) and brings several benefits to industry and business [3] in general as it has a wide range of applications such as industrial automation, logistics, Smart Grid, Smart Cities, health, defense etc. mostly for monitoring but also for control purposes.

Modbus: Modbus is a serial communications protocol originally published by Modicon (now Schneider Electric) in 1979 for use with its programmable logic controllers (PLCs). Simple and robust, it has since become a de facto standard communication protocol, and it is now a commonly available means of connecting industrial electronic devices.

IoT: The Internet of Things (IoT) is the interconnection of uniquely identifiable embedded computing devices within the existing Internet infrastructure. Typically, IoT is expected to offer advanced connectivity of devices, systems, and services that goes beyond machine-to-machine communications (M2M) and covers a variety of protocols, domains, and applications.[1] The interconnection of these embedded devices (including smart objects), is expected to usher in automation in nearly all fields, while also enabling advanced applications like a Smart Grid.[2]

Zigbee: ZigBee is a specification for a suite of high-level communication protocols used to create personal area networks built from small, low-power digital radios. ZigBee is based on an IEEE 802.15.4 standard.

We use cookies on our website to give you the most relevant experience by remembering your preferences and repeat visits. By clicking “Accept All”, you consent to the use of ALL the cookies. However, you may visit "Cookie Settings" to provide a controlled consent.
Cookie SettingsAccept All
Manage consent

This website uses cookies to improve your experience while you navigate through the website. Out of these, the cookies that are categorized as necessary are stored on your browser as they are essential for the working of basic functionalities of the website. We also use third-party cookies that help us analyze and understand how you use this website. These cookies will be stored in your browser only with your consent. You also have the option to opt-out of these cookies. But opting out of some of these cookies may affect your browsing experience.
Necessary Always Enabled
Necessary cookies are absolutely essential for the website to function properly. These cookies ensure basic functionalities and security features of the website, anonymously.
Functional
Functional cookies help to perform certain functionalities like sharing the content of the website on social media platforms, collect feedbacks, and other third-party features.
Performance
Performance cookies are used to understand and analyze the key performance indexes of the website which helps in delivering a better user experience for the visitors.
Analytics
Analytical cookies are used to understand how visitors interact with the website. These cookies help provide information on metrics the number of visitors, bounce rate, traffic source, etc.
Advertisement
Advertisement cookies are used to provide visitors with relevant ads and marketing campaigns. These cookies track visitors across websites and collect information to provide customized ads.
Others
Other uncategorized cookies are those that are being analyzed and have not been classified into a category as yet.
SAVE & ACCEPT